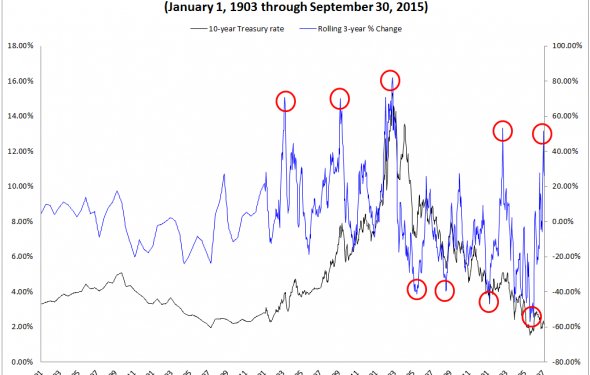 If you think the financial panic over Brexit is over — because stocks have bounced back somewhat from their initial sell off — think again.

As scared investors continue to seek shelter in boring government bonds, fixed income prices have soared while yields on 10-year Treasury securities plummeted to as low as 1.34%, marking the lowest levels ever seen in U.S. history.

In early morning trading Wednesday, yields bounced slightly to 1.37%. But that's a far cry from the 5% yields on 10-year Treasuries before the global financial crisis.

Overseas, the situation has gotten even worse: 10-year German and Japanese bonds have sunk further into negative yield territory, which means investors are so concerned about the economy that they're willing to pay officials for the right to park their money with the government.

But ultra-low interest rates can also be a sign that investors are so worried about stagnation or recession that their primary focus is on the safe return of their capital—that is, making sure they can simply get it back—not earning big returns on their capital.

The uncertainty caused by Britain's unprecedented move to leave the European Union has fueled fear over what's to come for the global economy. And in times of fear, investors generally flock to bonds, which drives up their prices and drives down their yields. (Market interest rates move in the opposite direction of bond prices.)

Less than two weeks after the vote, economists have already been ratcheting down their expectations for growth overseas. IHS Global Insight, for instance, now believes the gross domestic product among countries in the Eurozone will grow just 1.4% this year and 0.9% next year. Before Brexit, the economic research firm had been forecasting Euroepean economic growth of 1.7% this year and 1.8% in 2017.

How scared should you be?

It's far too soon to tell if the U.S. is also headed for negative rates. But one thing is clear: The so-called "yield curve" is flattening out. And that normally spells trouble for the economy.

The yield curve refers to the spectrum of rates paid by Treasuries of various maturities. Normally, longer-dated Treasuries — such as 10- or 30-year bonds that require investors to tie up their money for extended periods of time — pay substantially more than short-term debt, which poses less risk.

Yet when fear over the economy bubbles over, investors tend to flock into long-term bonds, driving down long-term yields. And when that happens, the gap between what short- and long-term bonds are paying decreases and the yield curve "flattens."

Why is this important? Because Nov. 14, 2007 was just two weeks before the start of the 2007-2009 recession that coincided with the global financial crisis.

If the yield curve actually inverts — meaning 10-year Treasuries start paying less than two-year Treasuries — it's virtually certain that the economy is in or headed for recession.

If the economy is so scary, why are stocks doing reasonably well?

That's a good question. IHS Global Insight economist Patrick Newport points out that "the seemingly contradictory demand for stocks given the rally in bonds is likely driven by the perception that the Federal Reserve will further delay raising rates in the wake of the Brexit vote, making stocks more attractive in terms of returns."

Income-oriented investors, who've been frustrated by the paltry yields being paid by bonds, may also be driving this trend.

Back in the early 1980s 10-year Treasuries were yielding 10 percentage points more than the dividend yield on blue chip U.S. stocks, notes Jack Ablin, chief investment officer at BMO Private Bank. "Nowadays that gap has disappeared and then some, " he said. Indeed, today, the dividend yield on the S&P 500—what you get for holding the stocks above and beyond stock price appreciation—is more than half a percentage point higher than what 10-year Treasuries are paying.

This trend could persist and stocks could keep rising for months on the strength of income investors. The problem is, if the bond market is right and the economy is this weak, eventually the stock market will get the message too.

Source: time.com
Related Posts
Categories
Latest Stories
Treasury bonds interest Credit quality Treasury securities are considered to be of high credit...
bond market history chart The starting point of any financial analysis must surely be a consideration...
average bond rate While many novice investors understand the basics of the stock market...
Bond yields and interest rates The market prices bonds based on the bond s particular characteristics...
Bond market Bloomberg While Bloomberg is commonly used across asset classes, it is perhaps most...