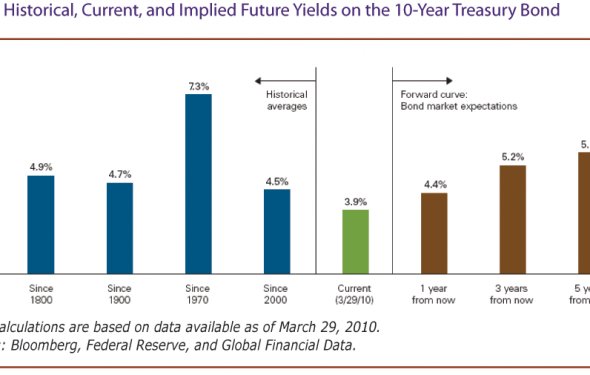 Today CBO’s Director testified before the Senate Budget Committee about the agency’s projections for the federal budget and the U.S. economy over the next 10 years, which were recently published in The Budget and Economic Outlook: 2017 to 2027. Among those projections are CBO’s assessments of interest rates, which are expected to rise gradually over the next few years before settling at levels that are below average values observed in previous decades.

As slack (that is, unused productive resources) in the economy keeps diminishing, the Federal Reserve will continue to reduce its support of economic growth, in CBO’s view. As a result, CBO expects the federal funds rate—the interest rate that financial institutions charge each other for overnight loans of their monetary reserves—to rise gradually over the next few years, reaching 1.1 percent in the fourth quarter of 2017 and 2.8 percent by the end of 2020 (see the figure below).

The projected increase in the 10-year rate reflects the anticipated increase in the 3-month rate and an expected increase in the term premium—the premium paid to bondholders for the extra risk associated with holding longer-term bonds. The projected rise in both long-term and short-term rates is consistent with CBO’s projection that economic output will grow somewhat faster than potential (that is, maximum sustainable) output for the next two years. Although financial-market participants may currently expect changes in policies that lead to faster output growth, CBO’s projection is based on current law. As such, the forecast reflects the assumption that market participants ultimately adjust their expectations.

In addition, various factors—such as investors’ heightened concern about relatively weak global economic growth—that pushed the term premium to historically low levels in recent years are expected to dissipate. The term premium rose after the recent elections, but it remains low. CBO projects that it will continue to rise over the next several years. Still, because the factors that pushed up the term premium are expected to dissipate slowly, CBO expects that the interest rate on 10-year notes will rise more slowly and stabilize slightly later than will the rate on 3-month bills.

CBO projects that the interest rates on 3-month Treasury bills and 10-year Treasury notes will average 2.8 percent and 3.6 percent, respectively, during the 2021–2027 period. The federal funds rate is projected to average 3.1 percent. The projected real interest rate on 10-year Treasury notes—that is, the rate after the effect of expected inflation, as measured by the consumer price index for all urban consumers (CPI-U), is removed—averages 1.2 percent between 2021 and 2027. That rate would be well above the current real rate but more than a percentage point below the average real rate between 1990 and 2007. (The 1990–2007 period allows useful comparisons because it featured fairly stable expectations of inflation and no severe economic downturns or financial crises.)

According to CBO’s analysis, average real interest rates on Treasury securities will be lower than they used to be for several reasons. CBO expects slower growth of the labor force and slightly slower growth of productivity, both of which will reduce the rate of return on capital. Furthermore, a greater share of total income is expected to go to high-income households, which will increase private saving and make more funds available for borrowing. CBO also expects the demand for Treasury securities relative to the demand for risky assets to be higher than its 1990–2007 average. That relatively higher demand for Treasury securities implies higher prices and therefore lower interest rates. And net inflows of capital from other countries, measured as a percentage of gross domestic product (GDP), are also expected to be greater, again making more funds available for borrowing.

Source: www.cbo.gov
Related Posts
Categories
Latest Stories
Sponsors Tips on what to do onset of cold Why was tamzin outhwaite in a wheelchair...
We are supported How to replenish electrolytes? What are tom chang md tips for eye health...
Helpful Who grow crops in the field? what career path should i take how object...
FAQ How much vacancy in upsc 2022 why activities are important? when theory...
Reference How to wash white vans? what time does trump leave the white house what...
Friendly sites