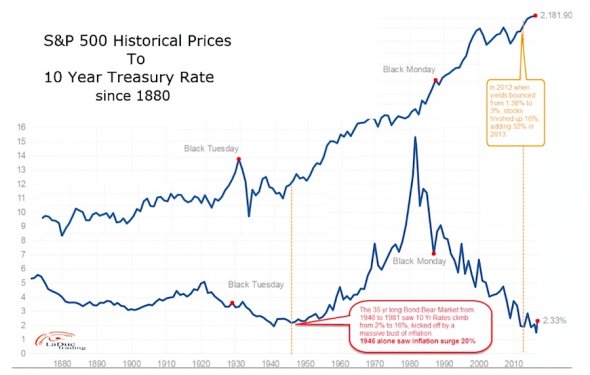 "The starting point of any financial analysis must surely be a consideration of the economic cycle: not just where we stand within the current cycle, but more importantly, where that cycle fits within broader economic history, " writes Paul Jackson in his final note to clients in his role as an equity strategist at Société Générale.

The note — titled "Swan song: 12 pictures you can't ignore" — builds on the bank's recent call for clients to rotate out of U.S. stocks and into European stocks. The SocGen asset allocation team predicts the S&P 500 will fall by around 15% when the Federal Reserve winds down its quantitative easing program, then go nowhere for years.

"For now, equity valuations in Europe are attractive and with a bit of economic growth the next few years could be quite rewarding, " says Jackson. "The immediate risks are that growth does not materialise in Europe or that the eurozone project unravels. For the longer term I worry more about latent inflation risks and central banks getting behind the curve. As bond markets react to that policy error, the folly of forcing banks, insurance companies and pension funds to hold so many bonds will become apparent. But that is for another day."

"Inflation may feel low compared to the history through which most of us have lived, but in a broader context it is boringly normal, " says Jackson. "Maybe without recent extra-ordinary policy settings, we would now be experiencing deflation, but we will never really know."

"Not only is the current level of inflation boringly normal, the valuation of the U.S. equity market, though elevated, is hardly exorbitant (to be fair, the only times it has been above the current level was during 1928/29 and over the last 20 years), " says Jackson. "With the sort of inflation regime experienced over the last 15 years, history suggests just about any valuation level is possible."

"The Shiller P/E may not be at an extreme, but history suggests the current level is associated with low single-digit future returns, " says Jackson.

4. U.S. companies may be in for disappointment.

"We could try to justify stretched valuations by the improved economic outlook and the consequent positive news for profits, " says Jackson. "However...[the chart] shows that profits usually sink over the coming five years when starting from such a strong level. This makes sense given that competitive pressures will rise when profits are strong (new capital is committed) and that labour will claim a bigger share of the pie when the economy is doing well (and unemployment falls)."

5. Europe's economy has room to improve.

"Europe would appear to be at a disadvantage compared to the U.S. when it comes to profitability, " says Jackson. "However, that is only natural given the state of the European economic cycle and a glass-half-full interpretation would look forward to higher profits once the European cycle strengthens."

"[This chart] suggests European profits may be about to enter a new upswing, as the economy starts to grow again (profits rarely expand without economic growth, but that once output grows there is a geared effect on income), " says Jackson. "The acceleration in U.S. profits that occurred in 2009/10 may be about to occur in Europe (in a muted fashion)."

"A number of things can be said on the basis of this chart, " says Jackson. "First, the correlation between the two data series is pretty good – the cyclically-adjusted dividend yield appears to have predictive power when it comes to future returns; second, the higher the yield the better the future returns and, third, the current yield has historically been associated with future five-year returns of around 12%, which is about twice the norm."

8. Many metrics suggest Europe is undervalued.

"It is hard to conclude from the above chart that unconventional central bank policies have caused a bubble in stock markets, " says Jackson. "Some indices may be at record highs, but so is my age. It is something that we have to get used to: markets that are nominal in value and that trend up over time will frequently be at record highs; my age hits a record level every day, though with no sign of a healthy correction! It is important to compare equity indices to the underlying profits and dividends that support them and, on that basis, are far from record levels."

9. The real bubble is in the bond market.

"Where central bank policies have caused a bubble is in bond markets – not surprising as those are the instruments that are bought before the funds end up back with the central bank in the form of excess reserves, " says Jackson. "The previous chart shows that bond yields have rarely been this low in the period since 1800. Indeed, the only other time was when the Fed was also manipulating the market during and after WW2."

10. The ECB's balance sheet has been shrinking for a while.

"What is really interesting, and little appreciated, is that the decline in the ECB balance sheet started in July 2012, even before Draghi’s 'anything it takes' speech, has now brought the balance sheet back in line with where it would have been had the pre-financial crisis trend continued (see trend line), " says Jackson.

11. The euro is getting a boost from ECB inaction.

"[The decline in the ECB balance sheet] is no doubt why the euro has confounded the bears (including us) – the chart below suggests the mystery is rather why it is not even stronger, " says Jackson.

12. The question is what happens when the Fed pulls back.

"How much good has this done? During the 1930s and 1940s, each jump in monetary base growth was followed three to four years later by an uptick in inflation and the upward drift in inflation in the 1960s and 1970s was preceded by acceleration in the monetary base, " says Jackson. "This time around, the effect on inflation appears to have been negligible (so far). An alternative interpretation is that without these policy actions deflation would have resulted. If that is the case, the fact that policy has remained so loose could be stoking up inflation risks."