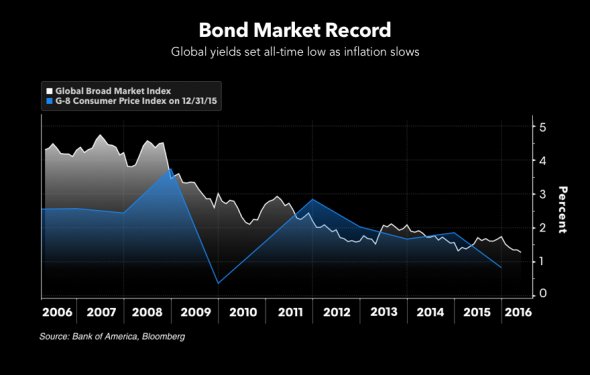 Is the bond rout over? You ain’t seen nothing yet and stock investors should take note.

The global equity rally that’s repeatedly shrugged off rising geopolitical uncertainty now faces a new test: the apparent certainty of higher borrowing costs. The spike in bond yields is just getting started, according to legendary fixed-income investor Jeffrey Gundlach. For Ray Dalio at the world’s largest hedge fund, the era of central-bank stimulus is now over.

Bond market stress showed signs this week of spilling over into stocks as well as other assets from gold to silver. Equities have reached all-time highs even in the face of North Korean missile tests, Persian Gulf confrontations and Washington turmoil this year, as investors bet the global economy can withstand higher interest rates. That hurdle is getting closer.

Sure, there have been calls before that the three-decade bond bull-market is finished, only for fixed-income returns to rally back. The Federal Reserve may well be close to cutting the size of its balance sheet and European policy makers are inching toward tighter policy, but cash is still sloshing around at the Bank of Japan ready to buy bonds.

The last time simultaneous declines occurred between bonds and stocks was during the taper tantrum in 2013 when the Fed hinted at reduced stimulus. Of course, the S&P 500 Index has returned above 10 percent a year since then.

The Wall Street consensus for higher bond yields this year had been tested from the highs reached in March for 10-year Treasuries as investors doused expectations for a growth boost spurred by Donald Trump’s administration. A slide to 2 percent then looked far more likely than a rally to 3 percent until central banks in Europe, the U.K. and Canada last month all delivered more hawkish commentary.

A rout in Treasuries and bunds intensified this week as the European Central Bank said it’s contemplating removing from its message a long-standing pledge to expand or extend the bank’s bond-purchase program if necessary. Global equities are on course for a second weekly loss, while gold and silver are declining as higher bond yield pressure non-interest bearing assets.

The recent selloff is a sign of more pain to come for U.S. bond bulls, according to Gundlach, DoubleLine Capital’s chief executive officer, which oversees $109 billion.

The last time the yield on 10-year Treasuries reached 3 percent was more than three years ago, when the Fed was still in full loosening mode and the Bank of Japan’s easing policy was expanding. Gundlach expects that to happen again, without specifying the time frame. The yield closed above 3 percent on just two days in December 2013.

Source: www.bloomberg.com
Related Posts
Categories
Latest Stories
Sponsors Tips on what to do onset of cold Why was tamzin outhwaite in a wheelchair...
Guide Halo 5 infection tips when making gamemode in what cell organelle does...
We are supported How to replenish electrolytes? What are tom chang md tips for eye health...
Helpful Who grow crops in the field? what career path should i take how object...
FAQ How much vacancy in upsc 2022 why activities are important? when theory...
Friendly sites