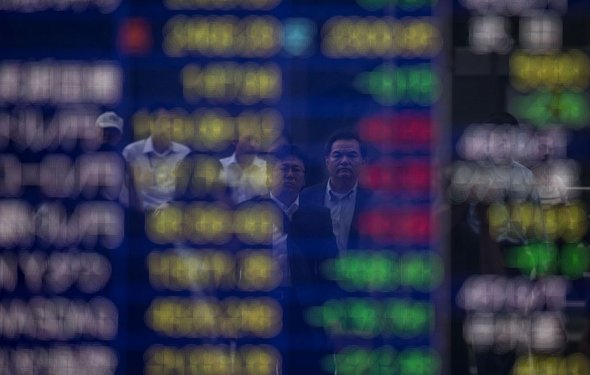 While many novice investors understand the basics of the stock market, many have an understanding of the bond market that’s hazy at best. It’s understandable, as bond prices don’t follow conventional wisdom that governs pricing across the rest of the market, and financial publications focus less coverage on bond trading than on stocks and other investments. Because of this, many beginners in the bond market hunt for bonds with returns above the average for the bond market. It’s a wise strategy, but flawed: Because of the dozens of different types of bonds and the way their market purchase price impacts their yield but not their posted rate, it’s impractical – not to mention largely irrelevant – to describe the average rate of return across all bonds on the market.

A bond is essentially a loan from an investor to a government agency or a corporation. An investor purchases a bond for face value — $1, 000 for example. In return, he receives periodic interest payments as described by the bond’s rate of, for example, 6 percent. In this case, the investor receives $60 annually for the life of the bond. When it matures at a date determined when it was originally issued, the borrowing party repays the initial purchase price to the investor, and interest payments cease. Several factors influence the rate when borrowers issue the bond, with long-term bonds typically paying higher than short-term bonds, and less risky investments, such as government bonds, paying lower than those of higher risk, such as corporate bonds. Finally, the prevailing interest rate at the bond’s issue date also affect its return.

Things become much less straightforward once investors begin trading bonds on the secondary market. Because bonds pay a constant return, their price on the open market is linked to changes in the prevailing interest rate. Continuing the example above, if the average interest rate increases to 7 percent, investors aren’t willing to purchase a bond with a substandard 6 percent return rate. Consequently, the market price of the bond falls to approximate prevailing rates so investors receive a 7 percent return on the purchase. Because of this, the bond would sell for $857, the price at which its $60 interest payment would be a 7 percent yield.

While bond return rates are defined when they’re issued, traders use a measure — yield — to determine its real-world returns based upon the price paid for the bond. Traders express a price as a figure that represents a percentage of its face value. For example, the bond issued for $1, 000 and purchased for $857 would be listed at a price of 85.7. Its yield, calculated by dividing its purchase price by its dollar-value rate of return, is 7 percent. These price and return rates vary daily because of changes in interest rates and other market factors, but are typically different from when the bond was issued.

Types of Bonds and Return Rates

The length time to a bond's maturity, as well as the bond issuer’s bond rating and the industry in which it works, also impacts the bond’s price. Because of this, it’s difficult to determine the average price of all bonds. In addition, this price fluctuates daily on market forces. According to CNN Money, five-year U.S. Treasury bonds typically pay yields about half of those of 10-year bonds, and 30-year bonds’ average yield is about 50 percent higher than those of 10-year bonds. Investment-grade corporate bonds pay a slightly higher yield than 30-year Treasury bonds.