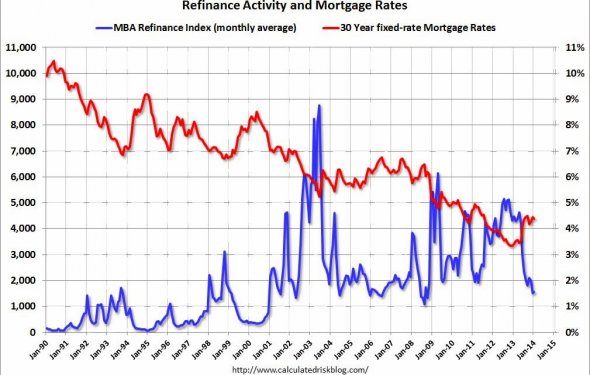 According to the latest data released Thursday by Freddie Mac, the 30-year fixed-rate average climbed to 3.96 percent with an average 0.6 point. (Points are fees paid to a lender equal to 1 percent of the loan amount.) It was 3.88 percent a week ago and 3.41 percent a year ago. The 30-year fixed rate has remained below 4 percent for the past seven weeks.

The movement of the 10-year Treasury bond tends to be one of the best indicators of where mortgage rates are headed. When yields rise, home loan rates tend to go up as well. In the past 10 days, the yield on the 10-year bond shot up 21 basis points to 2.35 percent on Tuesday before falling back to 2.33 percent on Wednesday. (A basis point is 0.01 percentage point.)

Besides jitters over North Korea’s long-range-missile test, financial markets have been rattled by the Federal Reserve’s expected sell-off of its balance sheet. In minutes from the June meeting, which were released Tuesday, the central bank signaled that it will press ahead with unwinding its stimulus program and raising its benchmark rate.

Nonetheless, some observers say this latest rate surge may have already run out of steam. Bankrate.com, which puts out a weekly mortgage rate trend index, found that two-thirds of the experts it surveyed predict rates will remain relatively stable in the coming week. Brett Sinnott, vice president of capital markets at CMG Financial, is one who expects rates to hold steady.

“Fortunately for the housing market, political stories continue to dominate the news, which has allowed rates to remain fairly stable to start the summer, ” Sinnott said. “It is still expected that the Fed will increase rates at least once more this year. So far, the moves have had little effect on mortgages.”

The refinance share of mortgage activity accounted for 44.9 percent of all applications.

“Purchase applications increased last week and reached their highest level in two weeks as factors supporting housing in the U.S. remained healthy, ” said Joel Kan, an MBA economist. “The 30-year fixed mortgage rate increased to its highest level since May 2017, following a jump in the U.S. 10-year Treasury, which was driven mainly by news that European economies have strengthened and the [European Central Bank] may be poised to tighten its accommodative policies. Refinance applications fell slightly in response and the refi index remained close to its 2017 year-to-date average.”