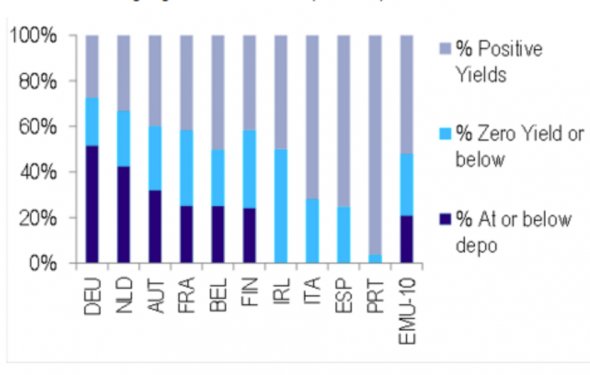 One of the occupational hazards of being a professional economist writing for a broader audience is that sometimes you lose track of what is and isn’t obvious to smart people who haven’t spent their lives immersed in your field. (Actually, the same problem arises in teaching undergraduates.) So I welcome it when people ask questions in an open-minded spirit, and reveal that there is some bit of stuff that I’ve been taking for granted as obvious, but isn’t.

So, here’s the question I was just asked: How can it be that interest rates on U.S. government bonds are so much higher than on European bonds — not just German bunds, but even Spanish and Italian bonds are now paying less than their U.S. counterparts. My correspondent asks, Is the U.S. government really a riskier bet than that of Spain?

The answer is no, it isn’t. In fact, investors assign virtually no risk premium to holding U.S. government debt, and rightly so. I mean, even if you thought the US might default in the next 10 years, what, exactly, would you propose to hold instead? A world in which America defaults is one in which you might want to invest in guns and survival rations, not German bonds.

In that case, however, what explains our relatively high interest rates?

But why should we expect a falling dollar vis-a-vis the euro? One big reason is that European inflation is very low and falling, while the U.S. seems to be holding near (although below) its 2 percent target. And other things equal, higher inflation should translate into a falling currency, just to keep competitiveness unchanged. If you look at the expected inflation implied by yields on inflation-protected bonds relative to ordinary bonds, they seem to imply roughly 1.8 percent inflation in the US over the next decade versus half that in the euro area, which means that the inflation differential explains about 60 percent of the interest rate differential.

Beyond that, there is good reason to expect the dollar to fall in real terms over the medium term. Why? The relative strength of the US economy has led to a perception that the Fed will raise rates much sooner than the ECB, which makes dollar assets attractive — and as Rudi Dornbusch explained long ago, what that does is cause your currency to rise until people expect it to fall in the future. The dollar is strong right now because the U.S. economy is doing better than the euro area, and this very strength means that investors expect the dollar to fall in the future.

So that’s what the Germany-US differential is about: higher US inflation (which is a good thing) plus the expectation that the dollar-euro rate, adjusted for inflation, will eventually revert to a normal level. Ultimately, it’s all about European weakness and relative US strength.

Finally, Spain and Italy have higher rates than Germany because they really are perceived as risky. But the risk spreads are fairly small these days, so that at this point their rates are nonetheless lower than ours.

Now, the interesting point about my correspondent’s confusion is that it ties right into a key policy issue, namely, how much should countries like the US or the UK worry about bond vigilantes? The answer is, not much, which is apparent once you realize that economic expectations, not fear of default, are the main reason their rates go up and down. It’s too bad that so much of the financial press still doesn’t understand this.

Traffic stats
Source: krugman.blogs.nytimes.com
Related Posts
Categories
Latest Stories
Sponsors Tips on what to do onset of cold Why was tamzin outhwaite in a wheelchair...
Guide Halo 5 infection tips when making gamemode in what cell organelle does...
We are supported How to replenish electrolytes? What are tom chang md tips for eye health...
Helpful Who grow crops in the field? what career path should i take how object...
FAQ How much vacancy in upsc 2022 why activities are important? when theory...
Friendly sites