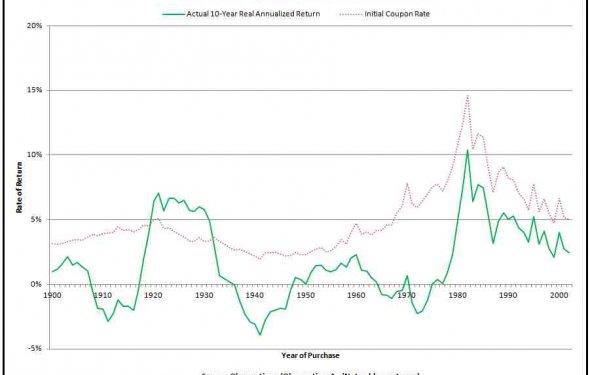 Interest rates around the world, both short-term and long-term, are exceptionally low these days. The U.S. government can borrow for ten years at a rate of about 1.9 percent, and for thirty years at about 2.5 percent. Rates in other industrial countries are even lower: For example, the yield on ten-year government bonds is now around 0.2 percent in Germany, 0.3 percent in Japan, and 1.6 percent in the United Kingdom. In Switzerland, the ten-year yield is currently slightly negative, meaning that lenders must pay the Swiss government to hold their money! The interest rates paid by businesses and households are relatively higher, primarily because of credit risk, but are still very low on an historical basis.

Low interest rates are not a short-term aberration, but part of a long-term trend. As the figure below shows, ten-year government bond yields in the United States were relatively low in the 1960s, rose to a peak above 15 percent in 1981, and have been declining ever since. That pattern is partly explained by the rise and fall of inflation, also shown in the figure. All else equal, investors demand higher yields when inflation is high to compensate them for the declining purchasing power of the dollars with which they expect to be repaid. But yields on inflation-protected bonds are also very low today; the real or inflation-adjusted return on lending to the U.S. government for five years is currently about minus 0.1 percent.

If you asked the person in the street, “Why are interest rates so low?”, he or she would likely answer that the Fed is keeping them low. That’s true only in a very narrow sense. The Fed does, of course, set the benchmark nominal short-term interest rate. The Fed’s policies are also the primary determinant of inflation and inflation expectations over the longer term, and inflation trends affect interest rates, as the figure above shows. But what matters most for the economy is the real, or inflation-adjusted, interest rate (the market, or nominal, interest rate minus the inflation rate). The real interest rate is most relevant for capital investment decisions, for example. The Fed’s ability to affect real rates of return, especially longer-term real rates, is transitory and limited. Except in the short run, real interest rates are determined by a wide range of economic factors, including prospects for economic growth—not by the Fed.

If the Fed wants to see full employment of capital and labor resources (which, of course, it does), then its task amounts to using its influence over market interest rates to push those rates toward levels consistent with the equilibrium rate, or—more realistically—its best estimate of the equilibrium rate, which is not directly observable. If the Fed were to try to keep market rates persistently too high, relative to the equilibrium rate, the economy would slow (perhaps falling into recession), because capital investments (and other long-lived purchases, like consumer durables) are unattractive when the cost of borrowing set by the Fed exceeds the potential return on those investments. Similarly, if the Fed were to push market rates too low, below the levels consistent with the equilibrium rate, the economy would eventually overheat, leading to inflation—also an unsustainable and undesirable situation. The bottom line is that the state of the economy, not the Fed, ultimately determines the real rate of return attainable by savers and investors. The Fed influences market rates but not in an unconstrained way; if it seeks a healthy economy, then it must try to push market rates toward levels consistent with the underlying equilibrium rate.

This sounds very textbook-y, but failure to understand this point has led to some confused critiques of Fed policy. When I was chairman, more than one legislator accused me and my colleagues on the Fed’s policy-setting Federal Open Market Committee of “throwing seniors under the bus” (to use the words of one senator) by keeping interest rates low. The legislators were concerned about retirees living off their savings and able to obtain only very low rates of return on those savings.

I was concerned about those seniors as well. But if the goal was for retirees to enjoy sustainably higher real returns, then the Fed’s raising interest rates prematurely would have been exactly the wrong thing to do. In the weak (but recovering) economy of the past few years, all indications are that the equilibrium real interest rate has been exceptionally low, probably negative. A premature increase in interest rates engineered by the Fed would therefore have likely led after a short time to an economic slowdown and, consequently, lower returns on capital investments. The slowing economy in turn would have forced the Fed to capitulate and reduce market interest rates again. This is hardly a hypothetical scenario: In recent years, several major central banks have prematurely raised interest rates, only to be forced by a worsening economy to backpedal and retract the increases. Ultimately, the best way to improve the returns attainable by savers was to do what the Fed actually did: keep rates low (closer to the low equilibrium rate), so that the economy could recover and more quickly reach the point of producing healthier investment returns.

A similarly confused criticism often heard is that the Fed is somehow distorting financial markets and investment decisions by keeping interest rates “artificially low.” Contrary to what sometimes seems to be alleged, the Fed cannot somehow withdraw and leave interest rates to be determined by “the markets.” The Fed’s actions determine the money supply and thus short-term interest rates; it has no choice but to set the short-term interest rate somewhere. So where should that be? The best strategy for the Fed I can think of is to set rates at a level consistent with the healthy operation of the economy over the medium term, that is, at the (today, low) equilibrium rate. There is absolutely nothing artificial about that! Of course, it’s legitimate to argue about where the equilibrium rate actually is at a given time, a debate that Fed policymakers engage in at their every meeting. But that doesn’t seem to be the source of the criticism.