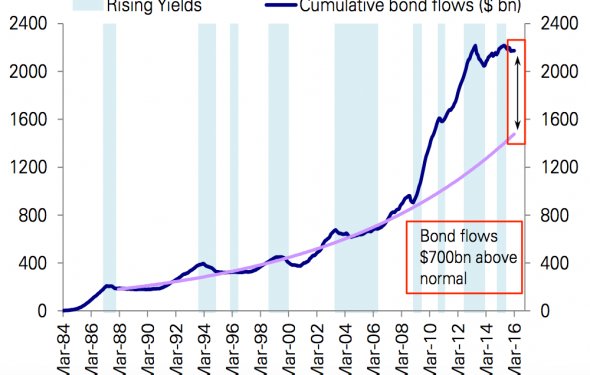 Bonds issued by governments and companies are priced high these days. In the seesaw relation of bond prices to their yields, prices are up, and yields are smacking hard against the ground, at record lows.

Investors, wary of stock valuations and looking desperately for yield, have poured money into bonds and bond funds.

There was a brief scare in September when bond prices suddenly fell over concerns that the Federal Reserve and other central banks might end their “easy money” policies.

But that pullback quickly vanished, with investors convinced that the Fed will move slowly in eventually raising rates. Bond prices recovered.

So, are we left with a valuation bubble that will burst, as tech-stock investors experienced more than 15 years ago? Or are the worries merely another false alarm, which bond investors have heard before for many years?

Robert C. Pozen, a senior lecturer at MIT Sloan School of Management and former mutual-fund executive, argues that the situation is verging on a bubble as yield-hungry investors are gravitating toward riskier bonds. Guy LeBas, chief fixed-income strategist at Janney Montgomery Scott in Philadelphia, says he doesn’t see the credit excesses that would qualify this market as a bubble.

YES: Investors Are Reaching for Yield, at Their Peril

The global bond markets are verging on a bubble, which will likely result in a significant loss of principal value for major types of bonds by the end of 2017.

For many investors, the stock market seems overpriced, so they are seeking better returns in bonds, whether U.S. Treasurys, corporate junk bonds or emerging-markets securities. As buyers pour in, bond prices are soaring and yields (which decline as prices rise) are shrinking.

The situation verges on a bubble not only because bond yields are at historic lows, but also because investors are gravitating to lower-quality and longer-term bonds with higher risks. When these risks become realities, bond investors will flock to the exits—reducing liquidity and further depressing bond prices. If the bubble deflates, bond holders will experience deep declines in the current value of their bond portfolios.

Let’s begin with the situation in U.S. Treasurys. Because of the unorthodox tactics of the Federal Reserve, including massive bond purchases, the yield on the 10-year Treasury bond was down below 1.4% in July, the lowest on record—even lower than in 1933, when the U.S. unemployment rate reached 25%.

To obtain higher yields, some investors have bought 30-year Treasury bonds. Yet the yield on these longer bonds is only 2.47%, down from 3% in January. If interest rates revert to January levels, the current value of $100, 000 of these bonds will drop by over $10, 000.

Source: www.wsj.com
Related Posts
Categories
Latest Stories
Sponsors Tips on what to do onset of cold Why was tamzin outhwaite in a wheelchair...
Guide Halo 5 infection tips when making gamemode in what cell organelle does...
We are supported How to replenish electrolytes? What are tom chang md tips for eye health...
Helpful Who grow crops in the field? what career path should i take how object...
FAQ How much vacancy in upsc 2022 why activities are important? when theory...
Friendly sites